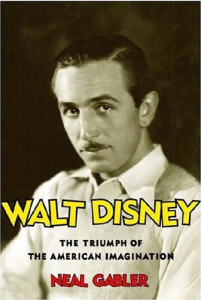 This was a really enjoyable read and a thoroughly entertaining analysis of a man I’ve always considered my hero. I still consider him my hero for the things he accomplished, but it’s just so much more realistic now. The structure of the book was very interesting because while it followed Walt’s life on a time line overall, individual sections would jump ahead a couple of years to follow the current line of thought and then you would jump back to the “present day” as it were. This provided a needed sense of continuity in validating the author’s overall thesis about Walt Disney and how he brought order to a world he couldn’t control through imagination.

One of the things I’m most interested in is how it all ties into where the Disney Company is going these days. Michael Eisner really did establish himself as the corporate image of the Disney Company just as Walt did. And after Frank Wells died in 1994, the same artistic chaos ensued in the company that would have occurred if Roy O. Disney had died before his brother Walt. Walt was always about bigger and better, sometimes even to the detriment of the company, and Roy was about financial prudence.

During the Depression, the Disney Studio stayed successful by investing in it’s own success. “Who’s Afraid Of The Big Bad Wolf?” became a theme song for the Depression because it was about plucky determination in the face of adversity, just like Mickey Mouse was in the early years. Later Mickey developed into an All-American good guy, trading in his trademark red shorts for pants and buying a house, reflecting the change in America through the war and the prosperous years following.

Walt never wanted to do the same thing twice. Hence, after Fantasia, he was never as engaged in the feature animation business as he was before. Sure there was the artist’s strike and the war, but the bare truth of it was that Walt needed something to fixate on, to channel his energy into. After the war, it was miniature tableau’s and model railroads, which developed into Disneyland. After Disneyland, it became even larger with the vision of a utopia known as EPCOT (not the theme park in Walt Disney World, but a truly Utopian Experimental Prototype Community Of Tomorrow where trash and plumbing were handled by tubes and taken to an underground processing plant…a self-sustaining city).

One thought on “Walt Disney: The Triumph of the American Imagination by Neal Gabler”