After thoroughly enjoying this film (and learning about ugly crying lol), I started digging around for Easter Eggs and found a few different articles discussing different ones, so I wanted to do a sort of compilation thing. Needless to say, SPOILERS AHEAD!

DIDN’T YOU HEAR ME THE FIRST TIME? SPOILERS AHEAD! 😉

The Pizza Planet Truck first appeared in the original Toy Story, and has been a regular occurrence in almost every Pixar movie ever since. In Coco, the truck is briefly visible near the very beginning of the film. Miguel opens a window to look outside and the truck drives right by in front of him. It’s moving at a high speed, so it’s difficult to tell what it is, but Pixar veterans who are used to looking for it will almost certainly be able to recognize the yellow delivery truck as it flies past. Apparently, it really is a pizza planet if the chain exists in multiple countries. In Coco, alebrijes are strange creatures that combine multiple animals together and act as spirit guides in the land of the dead. While that’s not a traditional part of Day of the Dead folklore, as the creations are only a few decades old, they are significant to the Mexican people, and they make their film debut in their traditional use, as small figurines carved and sold by the people. We see a table full of them early in the film, and while most are too small to really see, there are two fish, and one is orange and seems to look a lot like Nemo. The other is a dark blue fish that is reminiscent of Dory. Both characters are obviously from Finding Nemo and Finding Dory. Also seen in the shot is a mouse, which could be a reference to Ratatouille. 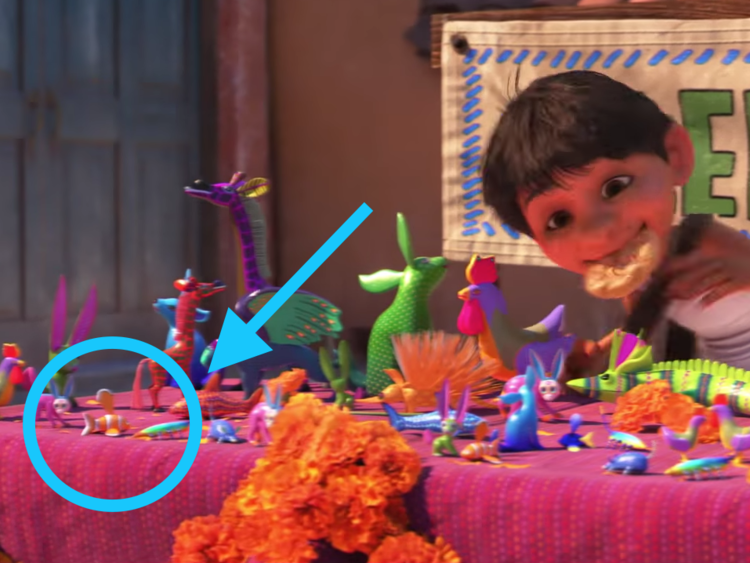 It’s common practice for each Pixar movie to make reference to the film that is set to come after it, and while the current plan is for next summer to see the debut of The Incredibles 2, for the majority of Coco’s production, the plan was to see Toy Story 4 get released in 2018. This is likely why we see Miguel run past piñatas designed to look like both Woody and Buzz Lightyear. However, they’re not alone, as we also see Mike and Sully piñatas, so Monsters Inc. gets a shout out, too.

Frida Kahlo might be better known if only because she was the subject of a biopic a few years ago starring Salma Hayek. She also appears briefly as a character in Coco. Well, two characters. First, we see Hector trying to impersonate her as a way to get across the bridge at the Day of the Dead customs checkpoint. However, later, it turns out that she’s an actual part of the story, as she’s handling the rehearsal for Ernesto de la Cruz’s Sunrise Spectacular concert. While known as a painter in life, she’s something of a performance artist here.

The Luxo Ball is a reference to Luxo Jr. the first animated short ever created by Pixar. The red and yellow ball appears in most every Pixar film and Coco is no exception. During the scene in which Miguel and Hector go to the rehearsal location for the sunrise concert, Dante the dog gets in a bit of a fight with a monkey alebrije. The two end up running all over the place, but if you have a quick eye you can spot the toy ball sitting on a table. There’s a little easter egg in many Pixar films that tends to get overlooked, which is the use of Apple products. While we see Apple products in many movies, they get intentionally inserted into Pixar movies because Steve Jobs became incredibly important to the company in its early years. In Coco, we see classic Macintosh computers, the CPU/monitor combo units that many of us surely remember, being used by the civil servants in the Land of the Dead’s Department of Family Reunions. Miguel’s great-great-grandmother refers to one of them as a “devil box,” and ends up destroying one by smashing it until it starts to smoke.

A113 is an easter egg found in many animated films, not just those made by Pixar. It’s a reference to the classroom at CalARTS where many of the industries’ top names learned early graphic design and animation, including many at Pixar. In Coco, A113 is an office number, as it was in Cars 3. This time, it’s the office of the clerk of the Department of Family Reunions, with the strange dog allergy, that explains how to break the curse that sent Miguel to the Land of the Dead in the first place. In addition to traditional Pixar easter eggs, Coco also makes a lot of references to Mexican culture that might not be so clear to an English-speaking audience. One of the best is the introduction of El Santo. El Santo was a Mexican luchador (professional wrestler) whose fame went far beyond the ring. He made numerous movies as well and was a massive star in Mexico, but he never even went out in public without wearing his mask. The mask was a part of him, making it fitting that he wears it, even in death, when attending the Day of the Dead party thrown by Ernesto de la Cruz.

While Toy Story 4 was originally planned to follow Coco, the movie that’s coming out next is currently Incredibles 2. This reference was more than likely thrown in at the last minute, since the superhero sequel may not have been planned to be included originally. As such, this easter egg is fairly hard to catch. However, if you pay attention as Miguel and Hector make their way to the Land of the Dead talent show, you’ll see them walk past a poster advertising The Incredibles. Apparently, the Land of the Dead gets movies really late.

As Miguel watches the talent show, there’s one act who not only bears a striking resemblance to the popular DJ but also is wearing the same skull shirt as Toy Story‘s Buzz-abusing bully.

One man has voiced a character in every Pixar movie, and that’s the great John Ratzenberger. While he has a prominent role in many of the studio’s films, like Mack in the Cars series or the Yeti in Monsters Inc., he has a “blink and you’ll miss it” cameo in Coco. His character’s name is Juan Ortodoncia, which is a name you’ll never hear, and he barely even speaks, but as you can likely guess by the name, he’s the character who gets to cross over on the Day of the Dead because he’s being remembered by his dentist.

Pixar’s Ofrenda
This one may not be quite an Easter egg, but if you sit through the credits of Coco, you’ll be treated to the studio’s own ofrenda, a series of photographs of many people Pixar wanted to recognize as having a large impact and influence on the studio. There are far too many to list here, and far too many to recognize without seeing the film multiple times, (or waiting until we can see it on Blu-Ray and hit pause). However, Walt Disney is there, of course, as is Don Rickles, the voice of Mr. Potato Head from the Toy Story movies who recently passed away. Also among those included: former Pixar CEO Steve Jobs.

Update (2017-11-30): The shark-like looking alebrije figure on the right-hand side of the table might be a reference to Destiny the whale shark from Finding Dory. There’s also a clownfish alebrije blending into the marigolds on the Rivera family ofrenda that I would bet money is supposed to be Coral (Nemo’s mom). Lastly, my favorite Easter Egg of all is that a skeleton looking very much like composer Michael Giacchino is the conductor for Ernesto de la Cruz’ Sunrise Spectacular.