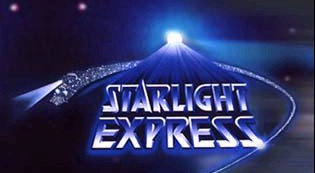 Andrew Lloyd Webber’s hit roller-skating extravaganza has been all over the world (I would know, I’ve seen it in Vegas and London). And it finally came to Orange County Performing Arts Center (OCPAC). I knew it was coming because during previous visits, I would watch this video loop they had of upcoming shows. But I wasn’t all that happy when they showed the Starlight Express preview. Why? Because at one point you see audience members wearing 3-D glasses. You know, the kind you would wear if you went to Honey I Shrunk the Audience at Disneyland, or Shrek 4-D at Universal Studios. You don’t expect that kind of shit to rear it’s ugly head at such an upscale joint as OCPAC (it’s very posh, if you get my meaning). But there it was in all it’s glory. I was so upset I almost cried. Of course I held up hope that it was just a misprint. All that was shattered when I walked into the theatre this afternoon and was handed a program with 3-D glasses sticking out. So I went inside and sat down. With no curtain, you could see that the stage was set up as a kind of half-pipe, with two halves on either side of the stage, both with two levels of incline and a catwalk in back connecting them. Oh, and there was lots of fog. When I say a lot, I mean it made a morning in San Francisco look like some junior high kid’s chemistry set. Then the lights dimmed. The introductory speech was amusing, but it scared me when it said it would let us know when to put on our “safety goggles”. <Shudder> The show begins and I begin to have a good time. I recognize songs that I had heard in London, but my father (who was with me at the time) didn’t recognize. This was because the music was updated at sometime to shift from 80’s cornball to 90’s sensibility. So now it’s time for the first race. With lots of fog and fanfare, a screen lowers and “The Kid” tells us to put on our safety goggles. At this point, my fears melt like an ice cube in Havana, because the screen looks really cool. Now as cool as the stuff was, there were a bit too many 3-D gimmicks to forgive. By 3-D gimmicks, I mean stuff flying towards the audience that looks “so realistic” because it sticks out of the screen. That’s too cheesy for me to forgive. However I can accept some of the cooler 3-D effects. Like this one shot of a bridge that crumbles in the middle leaving a gap over a deep chasm. Or when one of the trains bumps his head on a crane and then 3-D cuckoo clocks spin around his head and one cuckoo pops out. That I enjoyed. I also enjoyed the show overall. Really cool stunts and flips and X-Games stuff on roller-skates. So go see it already.