Back when I was younger, Disney had a really cool afternoon program arrangement that aired on K-CAL 9 (at least where I was). It was entitled The Disney Afternoon. I really enjoyed it because it was fun to come home from school and watch the next generation of Disney toons. (Heh, Next Generation. I love Star Trek). Speaking of Star Trek, there was one of those new toons that I came to thoroughly enjoy and celebrate. Gargoyles. 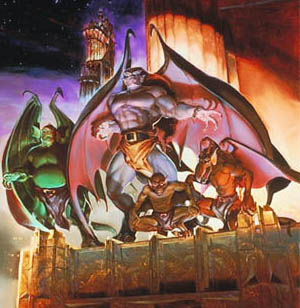 “In 1994, Buena Vista Television released the animated series Gargoyles. The show followed the adventures of a band of Scottish gargoyles in present-day New York after sleeping in stone under a magic spell for a thousand years. Gargoyles quickly became a hit with fans and lasted for two more seasons. Unfortunately, in early 1997 Buena Vista Television cancelled Gargoyles, despite the millions of fans who loved it.”

The above quote is from a Gargoyles fan-site that I discovered while pondering the ponderosa. I mean, surfing the web. If you want to check it out, here’s a link. Gargoyles Fan-site

I am a big fan of P2P (Peer to peer for all you uneducated schmucks out there) and it has helped me gain access to all the old episodes of my childhood. Of course, I’m not condoning the downloading and sharing of copyrighted material. I mean, here I am, on a public website, and I would have the balls to say “YES, I CONDONE THE ILLEGAL DOWNLOADING OF COPYRIGHTED MATERIAL!” Those aren’t my words, but what the hey. By-the-by, it’s only illegal if you sell it. But enough about dodging the police and hiring a scum-bag (lawyer, that is). Lets talk about voice-overs. I was recently watching episodes and I was again faced with that dilemma of the voices sounding familiar. I am a Star Trek: Next Generation fan. I always have trouble putting two and two together. I usually do more research than is necessary and have discovered that, OMIGOSH! David Xanatos is voiced by none other than Commander William T. Riker (AKA Jonathon Frakes) and Demona is voiced by Counselor Troi (AKA Marina Sirtis). Oh yeah, a minor player, Coldstone (rookery brother of Goliath) is voiced by Worf (AKA Michael Dorn). Another discovery is that Captain Kathryn Janeway of Voyager is the voice of Titania, wife of Oberon and ruler of all the fairies. For one episode only, but still it’s a notable Star Trek-Gargoyles cameo. If you’ve read my ramble, this may or may not make sense to you, but like I said, if you don’t like, I don’t care! HAHAHAHAHA! Don’t forget to tip your waitress on the way out! Buh-Bye now! Buh-Bye!