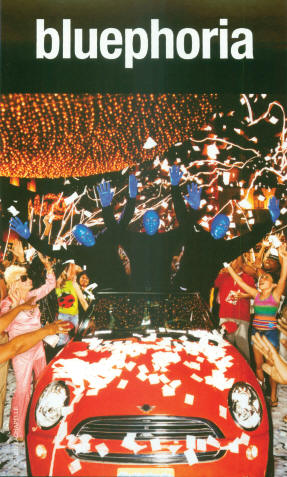 So what did I do for Thanksgiving Weekend. Got a haircut. Went to Vegas and created art by being hung upside down and slammed into a canvas covered in paint. No I wasn’t drunk, no I didn’t lose a bet (I’m still too young to gamble!)…I was a participant in the Blue Man Group show at the Venetian. So here’s what happened. A Blue Man selected me randomly out of the audience and brought me up on stage. They helped me into a plain white jumpsuit, placed a blue mark on my cheek (think Indian war paint) and put a blacked out motorcycle helmet on my head. Then they led me off stage and covered the jumpsuit with blue paint (rather roughly I might add). Then they attached a rope to my leg, hung me upside down and slammed me into a canvas. And then they pulled me out of a Jell-O Mold. Don’t ask me how they did that last part, I think I blacked out after being slammed into the canvas (I woke up and all I saw was orange). And then before taking the following photos, I just wiped the war paint off (they gave me a hand wipe backstage). It was an impulsive and stupid thing to do, but at least I got pictures!

But there’s also some interesting news coming back from Vegas. While I was in the Wynn for Avenue Q, I chatted with the head usher (Bill) about the changes to Treasure Island and what’s coming soon. What did I learn?