I love that the Knights Who No Longer Say Ni made a David Letterman joke, (I’m not throwing stones, I’ve slept with all the knights on my staff; stupid human tricks) and John O’Hurley LOST IT! It was beautiful and hilarious and the single reason worth seeing the whole show (I saw it in Vegas 2 years ago). But then…did O’Hurley really lose it or convincingly act like he lost it? Apparently they did the same joke the night before, but then when our friends saw it a week later, it was a completely different joke! So it’s improvised every night. So is O’Hurley acting surprised because he’s prepared for hilarity or is he not preparing and losing it?

A lot of my old review (viewable hereSpamalot (The Vegas Edition)) still applies…tragically. Eric Idle just isn’t as good at adapting his material as Mel Brooks is (although that remains to be seen when Young Frankenstein comes around next year…I’m just saying so far).

The program had a fake program inside for the Finland musical that the show starts with (everybody hears Finland instead of England when the historian launches the show and they go into the traditional Fish-Schlapping Song!).

OCPAC put a giant foot out in front of the theatre. But they didn’t keep it primed during the run…they let it deflate and blow about during the day. At least we got to walk up to the theatre and start humming the Flying Circus theme song. 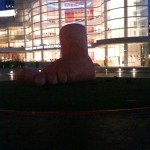 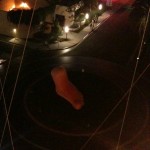 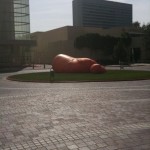 Spoiler Alert! (place and hold your mouse over the bar to see)

My biggest problem with the show is the whole Lancelot being gay thing. Now I’m a very open-minded individual, but the first time I saw that, it just displeased me. Sure there are funny jokes like: "Just think…in 2000 years this will still be controversial", but I just didn’t like it for some reason. A friend of mine pointed out that there is a very small bit in the movie that alludes to Lancelot’s homosexuality – when Lancelot saves Galahad from the tower of virgins, Galahad accuses him and Lancelot dismisses it. I guess I can live with it…and try not to rant about it if you ask what I thought…Also, there isn’t any Bridge Of No Return. No killing the historian. No arrest at the end of the movie. They find the grail and have a big splashy wedding. ‘I feel so…unsatisfied’ (Rounders).